This vocabulary requires that you understand how work in Spanish, including . Take a few days to learn about them here.

To express these ideas, keep in mind that the natural wording in English is different from Spanish. Make sure to add an indirect object and to use the word "the" in Spanish: don't think "he breaks his leg" but rather "he breaks himself the leg".

This same structure is used for many actions that are part of one's daily routine to get ready: in Spanish, don't think "she washes her hair" but rather "she washes herself the hair".

Recall that in a sentence like "se corta" ("he cuts himself"), the verb has one object: se is the direct object of the verb. 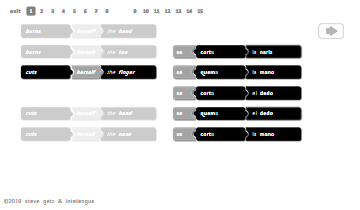